Fidelity International - Why we need a global ESG standard

At Fidelity International, our research disclosed that the market does, in fact, discriminate between companies based on their attention to sustainability matters, both in crashes and recoveries.Several are in development, but none has yet been universally accepted; this must change.

“They talk a good game but have been sanctioned by their largest customer for violations of labour laws.”

“They present themselves as being ‘A’ rated despite having a public history of toxic discharge into local waters.”

For some companies, as our analysts note above, words speak louder than actions on ESG matters; for others, the risk is that they are not promoting their ESG efforts enough. This inconsistency in reporting makes it harder for investors to allocate capital sustainably. Our analysts can dig into the real story on the ground, but only a common ESG standard can bring the kind of mass transparency that has been created by global financial accounting norms.

In our first survey focused on sustainability, we asked analysts: “What do you think about your companies’ efforts to promote their ESG credentials relative to their actions?” and gave them a scale of possible answers to capture whether companies tend to over or underpromote their efforts.

Overpromotion of ESG is often dubbed ‘greenwashing’ (i.e. when a company gives a misleading impression that its activities are environmentally sound). While the analysts reported some instances of this, as quoted above, their responses show they had a much broader set of behaviours in mind, including general differences in reporting approaches across regions, sectors and individual companies.

Question: "What do you think about your companies' efforts to promote their ESG credential relative to their actions?" Source: Fidelity ESG Analyst Survey 2021

North America has the highest proportion of Fidelity analysts reporting that companies tend to present their ESG efforts in the best possible light. According to one IT sector analyst, this manifests as “glossy ESG reports which cite large percentage changes in environmental metrics without giving context on whether they are material.”

Some large US corporates have made ambitious statements that may take time to realise; for example, the US Business Roundtable commitment on corporate purpose made in 2019 or the big net zero pledges made in the last 12 months. However, the US government is expected to push for standardised ESG regulation, which should lead to more accurate reporting, especially in relation to carbon emissions.

More surprising perhaps is that nearly half of our analysts think companies overpromote their activities in Europe, the region considered to be the most forward-thinking on ESG. Often companies are doing well in some ESG areas, and say so, but overlook others where they are weaker.

The need for an international standard

It is important to note that our analysts give relative scores in the survey for their own sectors and regions, so over-promotion of ESG in an advanced region like Europe may still be less in absolute terms than elsewhere. However, even on a relative basis, the findings show there is more work to do.

The newly introduced EU regulations - Sustainable Finance Disclosure Regulation (SFDR) - are designed to ensure that sustainability is reported in a consistent way across the investment industry. SFDR uses a taxonomy that has strict criteria as to what is and is not viewed as sustainable. These developments should help improve European corporate ESG disclosure over time, but Europe will need to link up with Asia (including China, India, Singapore, and Australia) and the US to ensure companies really understand what they should be reporting to investors around the world.

Ned Salter, global head of investment research, says: “This survey data shows we must get behind a global ESG standard and collaborate across regions to ensure that companies are being transparent and consistent on sustainability and there is a direct link between what they say and the actions they take.”

Several international ESG standards are being developed. These include the Sustainable Accounting Standards Board, the Sustainability Standards Board proposed by the IFRS and the Task Force for Climate-related Financial Disclosure (TCFD). So far, none has yet gained traction globally, but the survey highlights the urgency of narrowing these down to one or perhaps two widely accepted norms (similar to the IFRS and GAAP standards used for financial reporting). Until that happens, companies will continue to adopt different frameworks, do their own version of reporting, or not report at all. And investors will have to carry out their own in-depth research to understand what they are getting.

Some sectors have a greater incentive to talk about ESG

From a sector perspective, energy and industrials have the largest proportion of analysts who say companies talk up their ESG credentials. That is unsurprising given the pressure on these areas to show they are reducing emissions.

Less expected, perhaps, is that 50 per cent of healthcare analysts say their companies promote better ESG credentials than merited. “Most companies in the pharma space talk about improving access to healthcare but actions on drug pricing don’t match those commitments,” explains one healthcare analyst covering North America.

Question: "What do you think about your companies' efforts to promote their ESG credential relative to their actions?" Source: Fidelity ESG Analyst Survey 2021

At the other end of the spectrum from those companies that overpromote their ESG efforts are those that underpromote. We call these companies ‘greenblushers’. That is not to suggest that they are actively concealing the great ESG work they are doing; they simply disclose less than they could. This may be due to the cost of reporting, the complexity of filling in third-party ESG rating paperwork, ESG promotion not being the norm among a peer group or within a culture, or because companies are not required to disclose their activities by local regulators. Greenblushing is most prevalent in Japan, followed by China and EMEA/Latam.

An analyst who covers Japanese financials notes that historic perceptions of Japanese corporates have led to an under-appreciation of banks’ activities on climate change. “Japanese banks have begun to make lots of improvements over the past 12-18 months, including tightening lending policies to coal-fired power plants, and two of the three major banks have published their first TCFD reports. However, these improvements are yet to be fully recognised by the market.”

These perceptions should change as disclosure improves, and Fidelity regularly works with companies to help them understand the importance of ESG. As an example, we recently provided feedback to a mid-cap Japanese utility that had asked us to review its ESG report. We suggested it provide additional disclosure of its greenhouse gas emission reductions and other ESG activities to investors and ratings agencies. It agreed and improved its processes for quantifying and disclosing emissions. We upgraded the company two notches on our proprietary ESG scale, awarding it our highest rating. We expect its third-party rating will be raised in due course.

Companies like this can unilaterally improve their ESG disclosure and make themselves more attractive to investors. But the bigger picture is unlikely to change soon without wider cooperation between governments, regulators and investors to implement a universally recognised, credible and transparent system for ESG.

The value of the fund's assets will go down as well as up. This will cause the value of your investment to fall as well as rise and you may get back less than you originally invested. 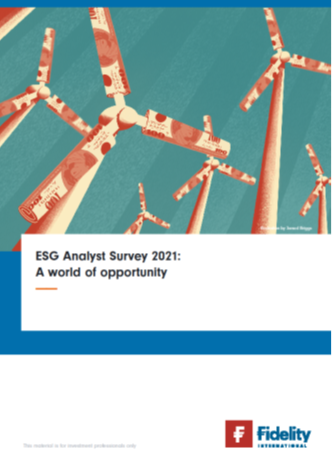